Edit
This article is incomplete. You can help Foxhole Wiki by expanding it.

Storms are not shown on the map. 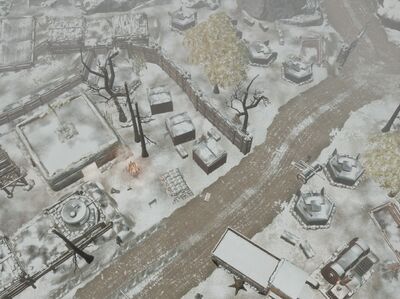 A snow storm is indicated by snowfall and fog as well as wind sound. A fresh layer of snow is visibly accumulating on terrain, structures, and parked vehicles. This shouldn't be confused with the static snow on the ground in the northernmost regions. The severity of the storm affects how much snow appears on the landscape and buildings.

The cold is the main mechanic of the Snow Storm. It can freeze soldiers, vehicles, and even bodies of water.

All vehicles slowly freeze if their engine is off. Once the vehicle is completely frozen it can't move or be packaged until it is warmed up. The snow visually accumulating on top of vehicles represents how cold they are. A fully frozen vehicle can be identified by the thick uniform layer of snow on its top. If the vehicle isn't fully frozen you can slowly warm it by keeping the engine on (stay in the driver seat) which doesn't consume any fuel if the vehicle doesn't move. Otherwise you can always quickly unfreeze and warm up any vehicle using a Fire Pit. If a ship freezes far from any shore there's no way to unfreeze it (except waiting for the storm to end). You cannot remove the fuel of a fully frozen vehicle.

Soldiers slowly freeze to death when exposed to the cold. The cold does not deal damage over time but instantly kills the soldier once completely frozen, similar to drowning. How close you are to dying is visually represented by the amount of snow on your soldier. Cold warnings will appear with the message "You are getting cold" and the "cold" status effect

under the stamina bar. When close to death, the status effect will change to "freezing"

and the message "You are freezing to death" will appear. You will shortly thereafter die from the cold. How fast the cold kills you depends on the severity of the snow storm, the strongest storms can kill you in about 2 minutes. Wearing a Snow Uniform will considerably increase the survival time.

Taking shelter in a Trench, Dug Foxhole, Bunker, or inside a closed-top vehicle or building (even a destroyed Garrisoned House) will protect you from the cold and slowly warm you up ("Slow Warming"

status effect). Craters, destroyed Relic Bases, and open-top vehicle seats do not protect from the cold.

You can also quickly warm up your body by standing next to a Fire Pit, giving you the "Warming"

status effect. How cold you are does not affect your speed.

Strong snow storms can also freeze ponds and rivers after a while, opening new routes for infantry and land vehicles but blocking ship navigation.

Shippable structures are unaffected by the cold.

Snow Storms reduce the player's vision range, similar to night time. The visibility reduction scales with the storm's intensity. The weakest storm reduces the range within which you can see infantry, Field Guns, Tripods, and Emplacements to 50 meters. Whereas stronger storms can reduce it to below 35 meters.

Unlike night time however, the limit of your vision is not really shown visually.

Snow Storms also reduce the off-road movement speed of infantry and vehicles. The reduction scales with the storm's intensity. The reduction of infantry off-road speed is 10% for weak storms and up to 33% for the strongest ones. Wearing a Snow Uniform does not remove this slowdown.

The tactical consequences of a snow storm are many. The most apparent is the slowdown of infantry movements. Troops move slower off-road and are forced to take shelter every few minutes, dramatically altering fights on open terrain. The use of Diesel skyrockets to fuel all the Fire Pits. The use of open-top vehicles is greatly limited, due to the exposed crew having to regularly stop to warm up. The reduced vision range make the use of all offensive vehicles riskier. Scouting and sabotage operations in enemy backlines becomes much harder. Using Motorboats becomes trickier due to exposed crew and potential frozen rivers. Binoculars and Sniper Rifles become less effective due to the shorter vision range. 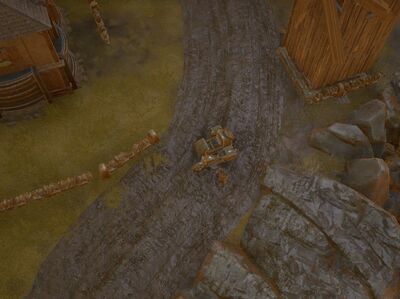 A rain storm is indicated by rainfall, rain sounds, as well as dirt and mud textures becoming glossy. The severity of the storm affects how much rain appears on screen and how glossy the terrain becomes.

The mud is the main mechanic of the Rain Storm. Unpaved roads (tier 1 & tier 2) and tier 1 trenches become muddy.

Vehicles move slower on muddy terrain (at least 10% reduction depending on storm severity). Only certain specialized vehicles are not affected.

Soldiers move slower on muddy terrain and mud accumulates on them

which increases their encumbrance. Up to 50% encumbrance can be added. Mud can be instantly removed by swimming in water. It can also be slowly removed by moving on non-muddy surfaces (beach, grass, concrete, asphalt road, etc...). Wearing a Rain Uniform (colonial faction only) significantly slows down the mud accumulation speed.

The range of all Intel gathering structures (Watch Towers, Observation Towers, etc...) and vehicles (LUVs, etc...) is reduced by the storm. The reduction scales with the storm's intensity, from 25% up to 50% range reduction for the strongest storms.

The tactical consequences of a rain storm are far fewer than for snow storms. It slows down infantry combat, especially when trenches are involved. It makes recon operation in enemy lines easier, especially with a Scout Uniform.