Vehicles unlocked in the vehicle Tech Tree can exist as a Prototype, Normal, Tier 2, or Tier 3 vehicle. 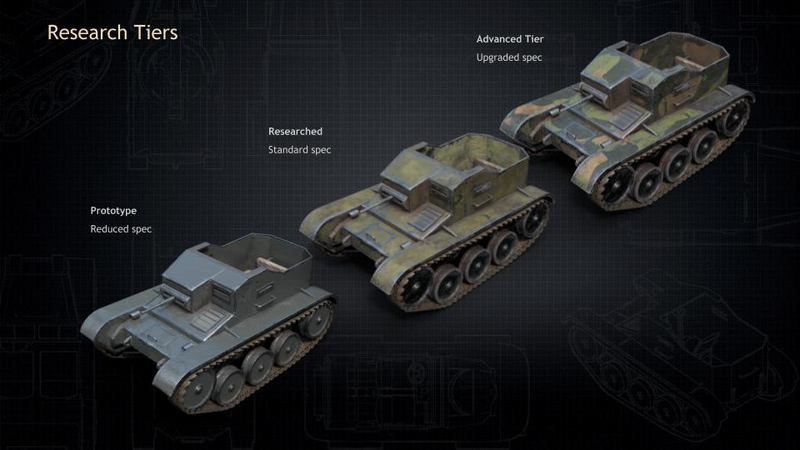 Prototype versions of vehicle types that are currently being researched in the Tech Tree can be produced at a Garage or Shipyard using Prototype Kits for 100 Basic Materials instead of the normal vehicle cost.

Prototype vehicles can be repaired with a Hammer and Basic Materials but the repairs cost twice the amount as a normal vehicle. They cannot be stored in a Storage Depot or Seaport.

If they have armor, prototype vehicles have a much lower chance of deflecting hits than the standard vehicle version.

Prototype vehicles can be distinguished from standard version by their lack of paint and metallic look.

The first tier is the "standard version" of the vehicle. This version of a vehicle is unlocked if the vehicle type is researched during the first pass (tier 1) on the technology tree. If that version is unlocked only that one will be available for the current war.

If a vehicle type is only unlocked during the second or third pass on the technology tree, that vehicle will be Tier 2 or 3. Some players call such vehicles "vetted".

On the tech tree, vehicles unlocked at Tier 2 and 3 will show one and two orange chevrons respectively on their icon.