The Tunnel Network is a strategically important structure that allows defences to have garrisoned AI which shoots at enemies automatically without players manning them. Defence structures such as the Foxhole, Pillbox, Gun Turret, Bunker, Sunken Pillbox, and Garrisoned House must be built within the vicinity of a Tunnel Network to have an active AI (About 40 meters). If passive defense structure gets disconnected from an active Tunnel Network, the AI will become inactive after 10 minutes.

Tunnel Networks can not be expanded in Skirmish mode. 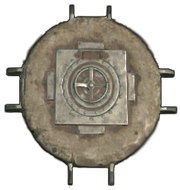