The Deadlands is the oldest map in the game. The first combat prototype, released on the 14th of July 2016, used a very small version of the center of this map.

In Update 0.12, all production buildings (barring the Medical Lab and Refinery) were removed from the map as a World Conquest balancing measure.
In Update 0.20, the new structure Safehouses have been implemented to this map.
In Update 0.36, this map had several design changes implemented, namely: 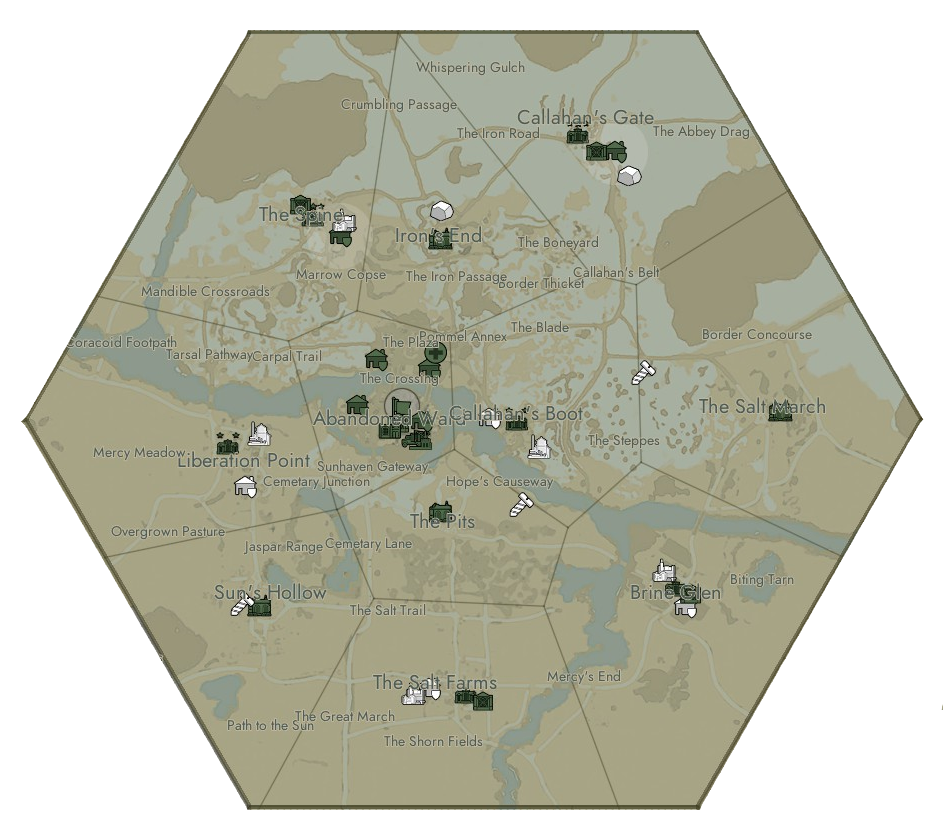 Named Locations in The Deadlands[1][]

A corpse who, by the look of him, has been dead for quite some time.

You pick through his satchel for supplies, careful not to disturb the bones. In it, you find naught but a letter. It looks ready to crumble. With the back of your hand you brush the flakes of snow off the envelope, and inch the letter out just enough to read it while kneeling.
Those southron bastards actually had the balls to march. We'd heard they might be buggered enough to make a move, the cunts, but even with all I'd seen, I wouldn't have thought they'd had the sacks for it. Those fucking greencoats couldn't keep their dicks tied up and just had to march north.
Some good that giant bloody wall did. I pissed on it before the boys and I trucked back to Sunhaven. Those pricks're coming, though. Gather the mules and get the girls to Whedon's Row. Stars take me if we can't hold here.
Love, Uncle Sean.

A slightly weathered sign with ornamental carvings and a welcoming script.

Welcome to the Great Caoivish capital of Sunhaven.
There comes a time when even our wise father Sun craves hearth and home.
- Iain Callahan.

The statue of Callahan towers over you. You feel welcomed by his outstretched hand.

There's a plaque. Most of the text is legible.
Caoiva's founder and first Archon, Iain Callahan, united the land with the promise of riches, safety, and bountiful harvest.
It was with his left hand that he offered our foes gifts of friendship, alliance, and protection.

The statue is destroyed and defaced. The sight is grisly and brings little comfort.

The plaque on the statue is charred and worn, but you can make out some of the text.
...instilled fear with his right hand.
With it he commanded vast armies and raised his shield for the good of all...
The rest is obscured.

You find the notes of an out-of-sorts doctor. Most of them are medical charts, diagnoses and random markings. However, one record seems out of place.

There's not much left to be done, I think. 'Oh, it'll be fine, Roger' they all said. I ain't no doctor and told 'em that the day they put me here. All we have're these bloody books to work from, and that's simplynot enough. Only help are crippled bastards who had no chance of seeing the front. Just the other day, got a report about some wounded men down south. These were folk they say might see another day, so's we sent out a dispatch. Blasted truck never made it.
I worry I've developed a martyr complex, killing myself to try to help those doomed the day they were born. Perhaps we all are. Perhaps I'm doomed to this damned orphanage. Irony is, it's kids here that die the most. Suppose I tried, ey.

You pluck a letter from amongst a smattering of papers and stationary.

By week's end, they'll be setting charges on that bridge to the north. To have spent our entire lives here just to be left behind. Mercy, indeed. Forgive my harsh words then, Carol–you've honoured our name in your own way. It was a mistake to have mistrusted you more than these walls. They have become our prison, our shame.

Under the letter, there's a paycheck from the NSRF to the same addressee.