Throughout a war, Technology slowly progresses. New weapons, structures, and vehicles technologies become available. The progression isn't automatic but player driven. All things related to tech are done at Engineering Centers where the Technology Trees can be viewed. Technologies are progressed by producing Prototype Kits of that technology using Iron Alloy, Copper Alloy, and Aluminum Alloy.

There are 2 separate tech trees: "vehicles" and "structures and weapons". Each tree progresses independently from the other. Each row on a tech tree is called a research level. The research levels and technology randomizes each war for each faction. 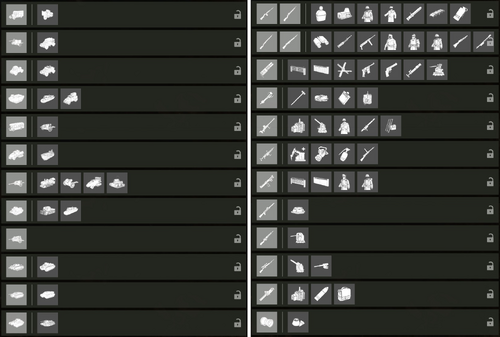 Multiple competing researchable technologies within a level can be progressed simultaneously, however the technology that has the most progress is unlocked once the sum of progress for all competing technologies equals 100% (e.g. 80% done on one tech and 20% on the other). The unlocked technology becomes widely accessible for production for the entire faction at Garages and Factories. The fixed technologies on that level become researched and the level itself gets locked while the tech tree moves to the next level. That locked research level will only be unlocked once all research levels are completed once and the tech tree advances to the next tier.

Not all levels are visible and will be marked 'unknown'. Progressing down the tech tree will reveal these hidden levels. 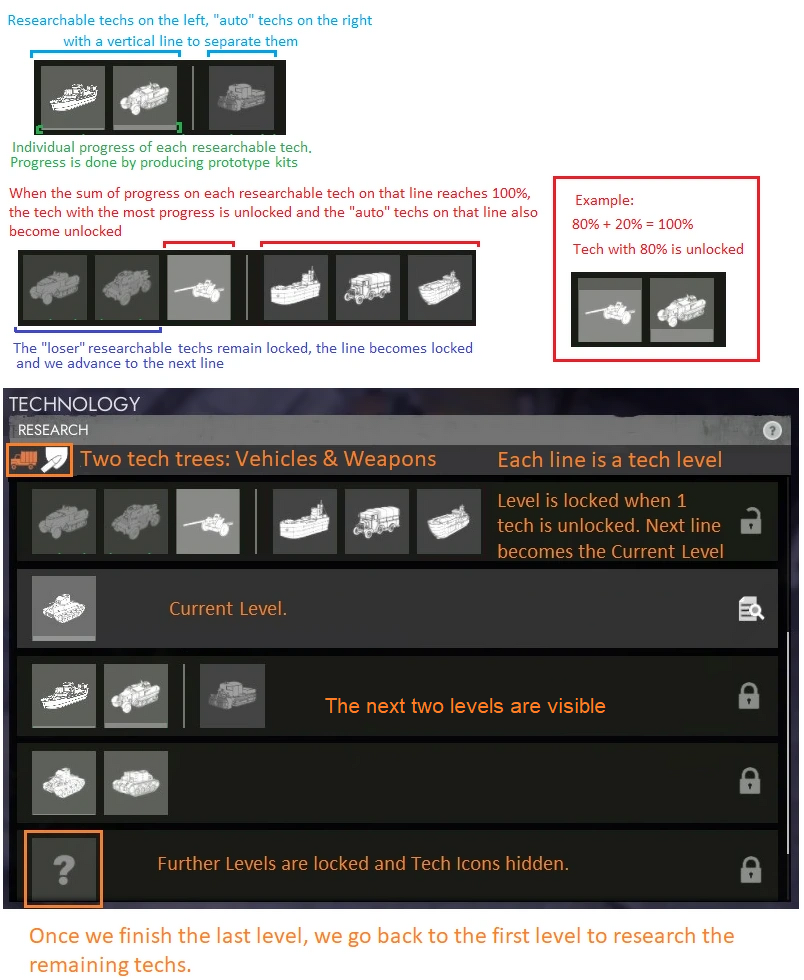 After every research level has been completed once, the tech tree advances to the next tier and starts at the first level again to research the previously unresearched technologies. For the weapons tech tree, the technologies researched are normal. But for the vehicle tech tree, the researched technologies will unlock higher tier versions of the vehicle. Higher tier vehicles can have benefits such as increased durability, faster speed, more maneuverability and are distinguished by their unique camo paint jobs. See Vehicle Tiers

Iron Alloy, Copper Alloy, and Aluminum Alloy are used to produce prototype kits of vehicles, advanced vehicles, and weapons respectively. They are refined at the Refinery (at a 1:1 ratio) from Iron, Copper, and Aluminum. Those are gathered whilst scrapping at Salvage fields. Copper can only spawn when using a Harvester. Each field will only ever spawn one type of material until cleared. If an Aluminum node spawns, all future nodes will be Aluminum. When the field resets it randomly selects iron or aluminum. One can expect on average approximately 300 Aluminum/Iron per salvage field cleared.

Prototype kits are produced at a Garage for vehicles and at a Factory or Mass Production Factory for items. 1 prototype kit is equivalent to 1 item crate or 1 vehicle. To use the prototype kit, just right click it when inside the factory or garage menu and select the option to produce prototypes and follow the same steps as for normal production. Prototype item crates cost the same amount as their normal version while prototype vehicle always cost just 100 Basic Materials.

Prototype vehicles cost twice as much to repair and cannot be stored in a Storage Depot or Seaport.

Using the prototype kits does not progress the tech trees.