Tank Armor is a hidden parameter of most armored vehicles, allowing to potentially deflect certain kinds of incoming fire. Deflected shots do not cause any damage and penetrating shots deal their full damage.

Only certain types of shells can be deflected: all armour piercing damage sources, 20mm, 30mm, 40mm, and R.P.G. Shells. If a weapon or ammo type's description specify it can penetrate armour that means it has a chance to be deflected, ironically. All other types of weapons will always cause damage, but usually less than a penetrating armour-piercing shell.

Certain shells have bonuses to penetration chance when hitting Tank Armor (mentionned in their description):

The state of a vehicle's tank armor is reflected visually by wear and tear. 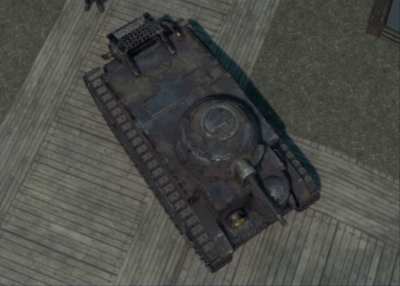 If the ammo used doesn't have Pen Bonuses, they are equal to 1 for the following equation.

Tank Armor can only be repaired at Garages and costs 100 Basic Materials. However vehicles specific to one faction cannot have their Tank Armor repaired in a Garage of the other faction.

Vehicles with Tank Armour cannot be packaged if their Tank Armor isn't fully intact, the vehicle's Tank Armor must be repaired at a Garage first. Trying to package a vehicle can be an easy way to verify its Tank Armor is intact.

Besides the Tank Armor mechanic, Foxhole possesses another armor mechanic that shouldn't be confused with Tank Armor. It is related to Light Kinetic, Heavy Kinetic, and Shrapnel damages.

"Light" armored vehicles are very resistant to the Light Kinetic damage type. Every Light Kinetic weapon and ammo deals only 1 point of damage to them.

Every armored vehicle with Tank Armor also possesses either "Light" or "Heavy" armor. However vehicles like Field Guns and Gunboats use that armor mechanic but do not have Tank Armor.