The Rocket Launch Site is a world structure that allows a group of players to launch a Ballistic Rocket to destroy players, vehicles and structures within an area. The site can be destroyed to prevent further use, but can be rebuilt with Basic Materials. The launch site is a single use structure - once the rocket is launched you cannot use it again. It will then show up in red on the map.

First the launch site itself must be built with 200 Refined Materials using a Construction Vehicle then 10 Squad members must gather the necessary materials and select the Build Rocket option in the site's menu. Any Rocket built by a Squad can only be accessed by that Squad or by members of the enemy faction. Needless to say, the Rocket must be protected from the enemy or you risk having it shot into your own lines.

Requires a Rocket Booster and a Warhead in your inventory to create. The Rocket can be completed with 200 Basic Materials

Once built, the Rocket automatically begins fuelling where it consumes 1 litre of Petrol from the Rocket Site`s inventory each minute until it is fully fuelled. Rockets require 720 litres (7.2 cans) of Petrol in order to launch in the current region, or 1440 litres (14.4 cans) of petrol to launch in any region.

Once the rocket has been constructed, it will take 72 hours before it will decay, this includes the time for fuelling which means for a max-range launch you will have 48hrs to use it before it decays.

Once the rocket has decayed, it takes 200 Basic Materials in order to rebuild it, the previously used Rocket Booster and Warhead are retained and can be used to complete the rebuild; it will however need to be refuelled.

Launch codes need to be entered by 3 players in order to begin the launch sequence. This requires a player begin transmitting launch codes with the use of a Radio Backpack. This can be done by crouching and holding the Transmitting Launch Codes key J. That player must continue transmitting the launch codes for approximately 15 minutes until the Rocket has launched. A message appears on everyone's game warning about the transmission. Until the Rocket is fire, the player who started the transmission must avoid being neutralized by the enemy. Upon reaching its destination, the Rocket will permanently destroy all structures within an 80m radius.

Allows you to enter a 4 digit launch code, obtained via a Radio Backpack, to initiate the Rocket's launch sequence. This must be done by three soldiers at the launching site. Upon filling in all three codes, the Rocket will launch. 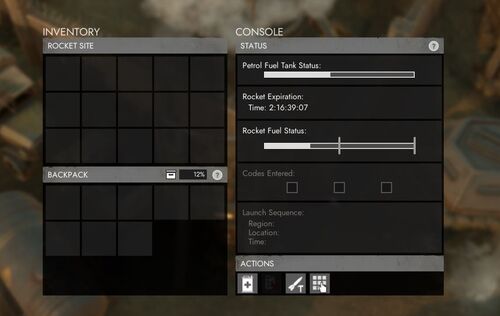 The launch of a rocket, contrary to its nickname of 'Nuke', it does not cause an after-effect that requires a Gas Mask and filter, the area is as safe as before.

The blast will destroy players, vehicles, and structures within the area, and will 'scorch' buildings such as Town Halls/Relics, Seaports/Factories, etc; which then cannot be rebuilt by either Faction, and turn 'red' on the Map.

Scorching a VP, will reduce the number required for a Faction to win, e.g. if a Faction has 31/32 and then destroys an Enemy/Neutral VP, they will win the War (given upgrade/etc criteria is met).