This article may contain outdated information that is inaccurate for the current version (0.42) of the game. It was last updated for 0.41.

Map Intelligence is a game mechanic which allows players to see, on their map, reconnaissance data gathered by their team.

It is gathered through Safe Houses, Watch Towers, Observation Towers, Radio Backpacks and Light Utility Vehicles. Any entities, friendly or not, spotted by one of the aforementioned sources are marked on the map with one of six icons, showing their respective location. The color of the icon determines the affiliation of the spotted entity, with blue for Wardens and green for Colonials.

Entities, if not continuously spotted, will have their icon on the map fade over time. Eventually, the icon will disappear from the map. It is important to establish a robust network of Watch Towers so that one's team is not hindered by old Map Intelligence.

It is wise for at least one player on the front lines to carry a Radio on them so they can, for example, note potential enemy weaknesses or report a large enemy push, in real time.

Every other structure (except for those with their own unique icons like Townhalls, Storage Depot, Safe house, etc...) does not appear at all on the map. Walls, Gates, simple Bunkers, Trenches, Sandbags, Barbed Wire, and Storage Boxes are not detected.

Map Intel can also be conveyed through Map Posts placed by other players. 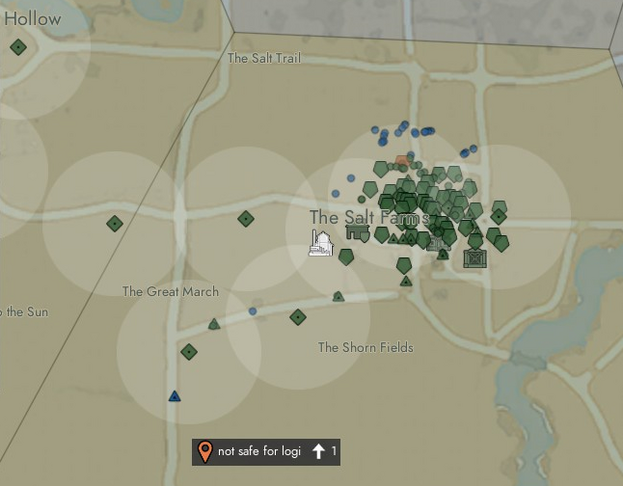 Example of Map Intel, with one Map Post
Retrieved from "https://foxhole.fandom.com/wiki/Map_Intelligence?oldid=27236"
Categories: