Back to page
Edit

The Manned Foxhole is a cheap, early-stage defensive building. Namesake of the game, Foxholes are the backbone of map control and the main tool in ensuring the security of logistic routes, material sources, and urban areas. Their primary role is aggressive area-denial against individuals and small groups of hostile players. Low cost and quick deployment also makes Foxholes an important tool in prolonged engagements on any battlefront.

A Foxhole is 'manned' by one NPC with a Rifle. While it has a fairly long range, it does not lead its shots based on target movements, which allows players to distract it continuously without being hit, especially while sprinting. However, it will easily kill anyone careless enough to get up close or moving directly towards it. A Foxhole will automatically engage enemies if in proximity to a base AND if the FOB has the upgrade to activate AI (80m for Forward Bases and 150m for Town Bases) and will keep firing at the current target until it is slain or left its firing range.

Foxholes are immune to small arms and take no damage from Frag Grenades, but are vulnerable to high explosives and heavy machine gun fire. Two High Explosive Grenades or one direct mortar hit will destroy a Foxhole. Small arms can still be used to suppress the AI and any player garrisoned in the foxhole.

Similar to all other defensive structures manned by NPCs, Foxholes within range of a base (80m for Forward Bases and 150m for Town Bases with AI upgrade activated) will have a colored flag of its faction. If disconnected, the foxhole AI will remain active for 10 minutes then the flag will become very short representing its inactivity. Foxhole texture becomes darker below 66% health.

A single player may enter the Foxhole and fire from it while being protected from harm. The only item that can damage players inside of this structure is the Green Ash grenade. Entering a Foxhole will also give players increased weapon accuracy/stability, but will limit their vertical firing angle as if they're being prone. If the foxhole is destroyed while the player is inside, the player will be killed. If the foxhole AI is suppressed (flag blinks white), the player inside cannot shoot either. 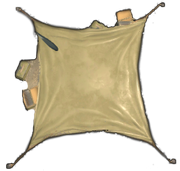