Foxhole uses a diegetic feedback system: there is no visible health bar, instead the game shows the player's health visually. When a player is hit, blood will appear on their character model. Depending on their health level, blood will range from minor to severe amounts. You will need medical attention from another player with a First Aid Kit to restore your overall health to 100%. 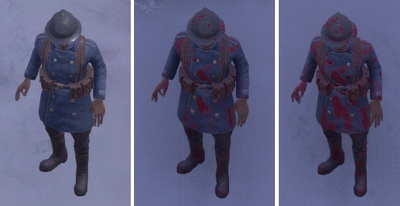 Although it's not visible a soldier has 100 hp, so a gun that deals 40 damage needs 3 shots to kill.

When something deals more than 20 damage to a soldier they are slowed down for a few seconds.

Whenever a player is hit there's a chance the Bleeding status is applied to them which mean they are now slowly losing their health. A blood drop icon appears below your stamina bar if you are bleeding. If you see blood spew off a soldier, it means that they are bleeding. You can stop your own bleeding by using a Bandage on yourself to stop the bleeding, but it won't heal you. Using a First Aid Kit on someone stops their bleeding on top of healing them. If you bleed for too long, you will be downed.

Downed/Wounded and the Death Timer[]

After sustaining a critical amount of injuries a soldier will collapse and a timer of 30 seconds will begin. This is the death timer. If they are not revived with a Trauma Kit by the end of the timer, they will die. The Wounded Player can be picked up by pressing E to be carried on your shoulder to be moved to safety, the soldier's death timer is stopped when carried and starts again when dropped. The wounded player gets the options to "give up" after 10 seconds of being downed or if someone is carrying them, press E to give up to go immediately to the respawn screen. Giving up as soon as possible won't make you respawn faster than if you wait for your death timer to end (time spent wounded is substracted from respawn timer).

A downed player is killed if they get hit.

When a Wounded Soldier's death timer reaches zero or they give up, the player dies but there's a small chance they will leave behind an item called a Critically Wounded Soldier. This item looks like a downed soldier on the ground except the soldier isn't bloody and is resting on its side. It can be picked up by pressing E and is carried on the shoulder, just like the Wounded Player. It can be brought to a Hospital or Field Hospital to be converted into Soldier Supplies.

Falling from a high place can hurt or kill you. A fall will only hurt if it's from more than 6 or 7 meters.

If you run out of stamina while swimming you will drown.