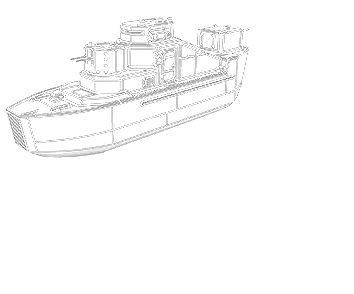 Gunboat is a combat vessel armed with a rear artillery battery for bombardment of static targets and a forward mounted machine gun for close engagements.

Despite its sleek appearance, the gunboat moves and turns quite slowly. It can be a little difficult to access from the land, but careful parking by a pier will allow the crew to exit onto dry land along the right side. Like all naval vessels, it can still move slowly ("drift") while damaged or out of fuel.

Even though it looks quite large and intimidating, the gunboat can be destroyed by just three hits from the RPG or mortar. A potential predator is the Landing APC, which is much faster than the gunboat while in the water and can sneak up behind it to attack with sticky grenades.

The front turret on the gunboat is a twin barreled high velocity 12.7mm machine gun, able to rotate through the 270 degrees in front of the vehicle. The gunner can see a fair distance, but due to the gunboat's fragility it can't really loiter near the shore to engage targets. The machine gunner's purpose is mostly to engage targets on the sea - particularly hostile gunboats - and provide extra situational awareness.

The light artillery delivers inaccurate rounds that deal decent damage to all targets across its blast radius.

This ranges between 50 minimum range and 100m maximum range. Most targets will require it to move within RPG range of the shore, where determined hunters can disable and/or destroy it easily. Like the field artillery, its shots can also hit high intervening terrain or buildings instead of the intended target.

The light artillery has a 270-degree traverse centered on the back of the ship.

You can switch directly between different crew positions in the gunboat using Ctrl-1 through Ctrl-4 by default. This can allow you to switch from a gunner seat to the driver's seat without swapping to the commander seat and potentially being killed. The recommended minimum amount of players to crew a gunboat is three with the driver swapping between spotting for the artillery gunner and moving the ship.

Gunboats do NOT have Tank Armor but they are very resistant to small arms fire.

Upon initial release in update 0.6, gunboats were smaller and had a deck able to be walked on.

The light artillery cannon used to be at the front while the field machine gun was located at the rear. The positions of these guns were latter swapped over when the gunboat model was updated.

The original cost to build a Gunboat was 120 Refined Materials but this was later changed to the current cost of 160. [1]