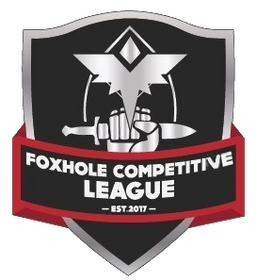 The Foxhole Competitive League (commonly abbreviated as FCL) is a community-run Competitive League participated by numerous Foxhole clans and alliances. It follows a league table style of play, where several teams compete with each other on Fisherman's Row or Tempest Island in a heavily intensive 20 vs 20 battle for three hours. The Normal Season consists of all the participating clans fighting each other for the most points, and proceeding into the postseason games where the top four teams compete in the semifinals and finals for the top three. Who plays in the postseason is decided on how many points you have at the end of the season. Whoever wins the finals will win the League. In the first season of the FCL, PUG won first place. The second season of the FCL is currently ongoing.

The current organisers of the FCL are Goonboon, Sir, and Gamma.

For season 1, the Fisherman's Row map was used, which was still a Skirmish map at that point, so it could function properly on its own. Its relative balanced design approach was favourable over other maps, as a balanced start is crucial for any competitive game.

For season 2, the matches took place on Tempest Island which is a small map with only 3 towns and even starting positions. The town, Iris is the objective in Tempest. In the event no one controls the town after the 3 hours the match will enter overtime and the first team to rebuild the Town Hall will win. If no one controls the town hall after overtime, the match will be considered a draw. The winner of the Match will receive 3 points, a Draw will be 1 point. The overtime is extended for the finals. If a team is able to capture all Townhalls before the time limit, will trigger the end of the match in a steamroll.

For season 3, the matches took place on the new map, simply called "FCL3", which was brought in only for the FCL, unlike Tempest Island which was initial open for skirmish game mode. The map was shelved after season 3.

For season 4, the matches took place on an old version of Fisherman's Row. Parts of the map were cut off, as displayed on the map with red lines

For season 5, the matches took place on a revamped version of Fisherman's Row, specifically changed to adapt to the needs of FCL. The major changes to the map consists of the removal of the bridge on the west, the mountains on the east, the flattening of the hills directly north and south of Eidolo, and some small corrections for balancing. It is not allowed to travel to the two islands in the east, on which the weapon dealers storage their equipment.

(Taken from the FCL Rulebook)

The Match rules for any official FCL match will follow similar rules to that of Foxhole:

In the event a team is found using any of the exploits, they will receive a strike. If a team receives three strikes during the Season they will be disqualified from the Season. Clans/Players found breaking these rules may be subject to removal from the match, and the team will lose that player's spot for the remainder of the match.

Auto clickers and Logi programs will NOT be allowed.

In the event both teams can field more than twenty men, they may. BUT both teams must still be able to field that same amount of men and will be capped at 30. This must be approved by an FCL Official, before the match can take place. During the course of your Match you MUST use the FCL Discord Voice Channels, this is to ease communication between players and officials. Channel Permissions have been set up so only your clan and Officials may join your Voice Channel, so don't worry about randoms or spies joining! Each team must submit their roster for that week at least three (3) days prior to their match. Late Submissions will be accepted case by case.

If on match day a team is unable to reach 20 players, the other team can choose to match how many players their opposite can field (Team A can only have 17 people that day, so Team B can choose to also Field 17 players), if the opposite team refuses to lower their men, then both teams will continue with the match.

Anyone may stream and record the matches, however we advise against streaming in order to prevent Stream Sniping. FCL Officials are barred from streaming a Match Live, and must enable AT LEAST a 10 Minute Delay.

Participating in the FCL[]

The requirements for being a participating clan in the FCL are:

The Foxhole Devs have given the FCL Officials and streamers special spectator tools which will allow invisible flying for use of commentary and refereeing. The matches will take place at various times, usually during the weekend - Streams of any matches will be posted onto the Foxhole Discord Announcements before they start.

Teams participating in the FCL 2 are either clans or a coalition of clans.

Registration for the fifth season of FCL opened March 2020 and closed the 12th of April. The rules are determined the 3rd of April.

This season, the matches return to a revamped Fisherman's Row in an attempt to gain hold of Eidolo. The major changes to the map consists of the removal of the bridge on the west, the mountains on the east, the flattening of the hills directly north and south of Eidolo, and some small corrections for balancing. As with previous season, the weapons dealer returns. Noteworthy is the removal of the machine gun in favor of the light machine gun.

It is planned to run from the 25th of April till the 20th of June. The tournament will be following a single elimination bracket.

Teams participating in the FCL are either clans or a coalition of clans. Current participants in order of registration are: