When Players drop items on the ground, the game creates a temporary wooden box where the item is stored. If another item is dropped within 5m of that box the item is stored inside it, if it is further away a new box is created. Players can interact with it like with any other storage by pressing E. Every type of item stacks inside those boxes.

The mechanic was added to reduce lag from item clutter on the ground.

The box isn't solid and doesn't block movement, but it can prevent structure placement when building.

The box is temporary and automatically disappears after some time. The lifespan of the box depends on a few criterias:

The lifespan is not affected by:

The only items to not use the dropped items box system are the Large Items. They have their own models when dropped on the ground and they last exactly 5 minutes if not picked up (except Critically Wounded Soldier which lasts 1 minute). 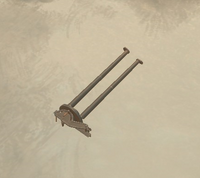 Vehicle/Structure Storage Box: When a vehicle or structure is destroyed, it drops its inventory on the ground in a box called "vehicle storage" or "structure storage". This box behaves exactly like a dropped items box. 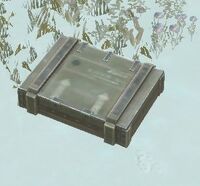 Dead player backpack: When a soldier dies they drop a backpack on the ground containing their items. The backpack also behaves exactly like a dropped items box. 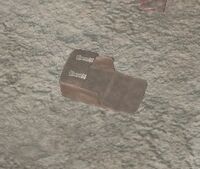