Deployment is the process of Players joining the world from the Home Region. In Foxhole, deployment is made strategic through the Deployment System.

From the Home Region players can deploy into the "real" World by interacting (E) with the Deployment area. This opens the Deployment Screen where they are asked to select a "Deployment Point". Each black diamond on the screen is a deployment point and corresponds to a Base in the world that's a Home Spawn Point. After selecting one, they will spawn at the corresponding base. Valid Deployment Points are defined by the Deployment System.[1] 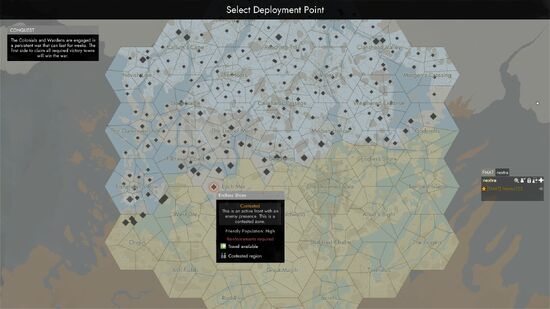 The Deployment System determines where a player can spawn upon entering the war from the Home Region. Each Home Spawn Point (Town Base, Relic Base, Border Base, and Deployed Landing Ship) has a "Garrison Size" that can be viewed on the Deployment Screen (relative size of the black diamonds) and on the map by putting your cursor on the base. Garrison Size grows with time at a rate that depends on the number of players that have their spawn assigned at the base ("Garrison Activity") and on the Garrison Upgrades the base has. If a base has a positive Garrison Size, it can be a valid Deployment Point, and players can spawn there from the Deployment Screen.[1] A player deploying to a base reduces that base's Garrison Size. The system ensures a huge group of players cannot suddenly deploy to a newly built base from Home Region.

Deployments from the Home Region do not require or consume Soldier Supplies, unlike respawns after death. However there's a limit to how frequently you can deploy, go back to the Home Region, and deploy again. You won't be able to deploy if your second to last deployment was less than 400 seconds ago (6min 40s).

Deploying to a base automatically assigns it as your Home Spawn Point for respawn purposes. One exception: deploying to a Bunker Base with Deployment Point

unlocked assigns it as your Forward Spawn Point.

Upon deploying, each player will start out with a Pistol, two 8mm magazines, and a Hammer. The pistol will be unloaded.