The cover and suppression system is designed to make combat more tactical and encourage more teamwork in general.

When a player is behind cover, they will receive a chance to mitigate incoming gunfire and their aim will also steady much faster than if they were out in the open. Players can also be suppressed by nearby gunfire, which will negate the bonuses given by cover and will also make steadying aim slower for players that are out of cover.

Players can enter cover by standing next to tall structures or crouching behind low structures in the environment. Pretty much any physical obstacle in the game can provide cover, vehicles, fences, trenches, walls, sandbags, inside a foxhole, on the side of a foxhole, buildings, etc. Using the cover only requires that you stay very close to the structure and that you face towards it (or at least not turn your back to it).

The cover system has 3 levels

. Which level you get depends on the distance between you and your cover structure and the angle between the structure and where you're facing. If you're not hugging the covering element your cover level will lower very fast. If you are aiming at more than a 90 degree angle from your covering structure you won't get the highest cover level, and the level will lower quickly after the 90 degree mark. Having your back to the covering element will completely remove your cover. Standing when next to a crouch-height structure will provide zero cover.

The higher the cover level the bigger the buffs provided by the cover, and the increase isn't linear, so you should always strive to be in full-shield cover.

Players are suppressed when they are near gun fire (not explosions). Suppression is represented by this icon

if you don't have cover, or by your Cover shield becoming red depending on how suppressed you are. Suppression does two things,

In practice this means that suppressing an enemy position reduces both the accuracy and amount of incoming fire.

The AI of certain defenses such as Rifle Pillboxes can be temporarily suppressed if a high volume of bullets is fired at them in a short time. A suppressed defense will have its flag blink white. A player garrisoned inside a suppressed defense cannot shoot back. When the flag starts blinking fast it means the suppression effect is about to disappear. The suppression effect can be sustained by continuing to fire, the volume of fire necessary to keep a defense suppressed is less than the initial effort. Unlike player suppression, you need to actually hit the defense in order to suppress it, firing around won't do anything.

You'll need about 30 7.62mm bullets to suppress a Tier 2 Rifle garrison, and 15 for a rifle pillbox.

Bases, Garrisoned Houses and AT Gun Garrisons are immune to it. 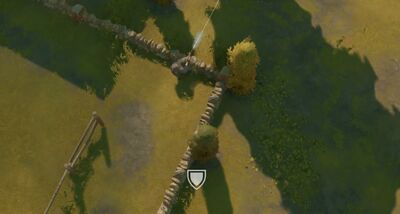