Despite its top-down perspective, Foxhole's world is fully 3d. Other soldiers, Field Guns, and most constructions are only visible if your character has line of sight to them. Solid walls or the shape of terrain can prevent you from seeing defenses or other players, even friendly ones.

Vehicles are always visible, regardless of any intervening objects, though the identity of the soldiers inside can be obscured.

The flash and smoke of gunfire, as well as tracers, are always visible even if you can't see the soldiers responsible.

Compared to the common 16:9 ratio, 4:3 ratio (16:10 to a lesser extend) allows player to see more of the top and bottom of the screen without that of left and right[1].

During the day, there's no limit to how far you can see. With items like the Binoculars or Sniper Rifle it is possible to see other soldiers over a hundred metres away.

As night falls, the distance you can see other soldiers drops, getting smaller and smaller until midnight, after which it slowly expands again. AI-controlled defenses also have their vision radius reduced in this way, making them less effective at night. The distance at which you can see structures is unaffected by night time.

Because this affects your ability to see friendly soldiers as well as enemy ones, it can be easy to lose your teammates at night. Try to stick close to them. If you have a radio, the intel map can help you relocate them. 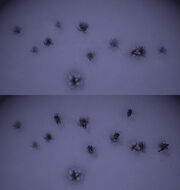 Some bushes only hides players when they crouch.

Immobile soldiers in large enough bushes can become hidden and impossible to see from further than a couple of metres away. Crawling or walking will cause them to be revealed, but rotating or taking out weapons does not. Some bushes are small enough that they can only hide someone who is crouching or prone. When you are hidden your outline will take on a faint, striped pattern, and a crossed-out eye icon

will appear at the top left of the screen.

AI-controlled defenses are unfazed by bushes and will shoot at you even if you are hidden in them.

Combating enemies in bushes can be difficult. They can't move without being revealed, so grenades can be a powerful way to flush them out. Vehicles can also run them over, though this may be a risky proposition if there's a chance the enemy has sticky grenades! In the absence of better options, indiscriminate fire into the bush or where their muzzle flash reveals them to be can eliminate enemies. A bayonet charge is also very satisfying in the event you can pull it off.

Field Guns can be hidden in large bushes, allowing them to ambush the enemy.

Smoke blocks the line of sight of soldiers and garrisoned defenses. This can be used to deploy HE grenades or satchel charges, though these have fallen out of vogue with the rise of the RPG. Since they are always visible, smoke can be annoying to vehicle crew, who cannot see through the smoke but are not obscured by it.

If you are inside a cloud of smoke, you are hidden even if you move. And AI defenses will be unable to shoot at you. This makes Smoke Grenades ideal to sneak inside the defense lines of the enemy.