This guide teaches you how to understand and use the map and all its functionalities.

The World Map is divided in 37 hexagonal Regions of side length 1097m, which are themselves divided in Region Zones. The region you're in will also have a grid superimposed on it, using letters A-Q for horizontal coordinate and numbers 1-15 for vertical. Each large square on that Grid is 125m by 125m, and each is subdivided into 9 small squares. With this you can transmit very accurate location info, simply say "G9k3" (k for keypad) for example. If particular regions appear darkened on the map it means they are not included for the current war or the region server is offline/restarting. 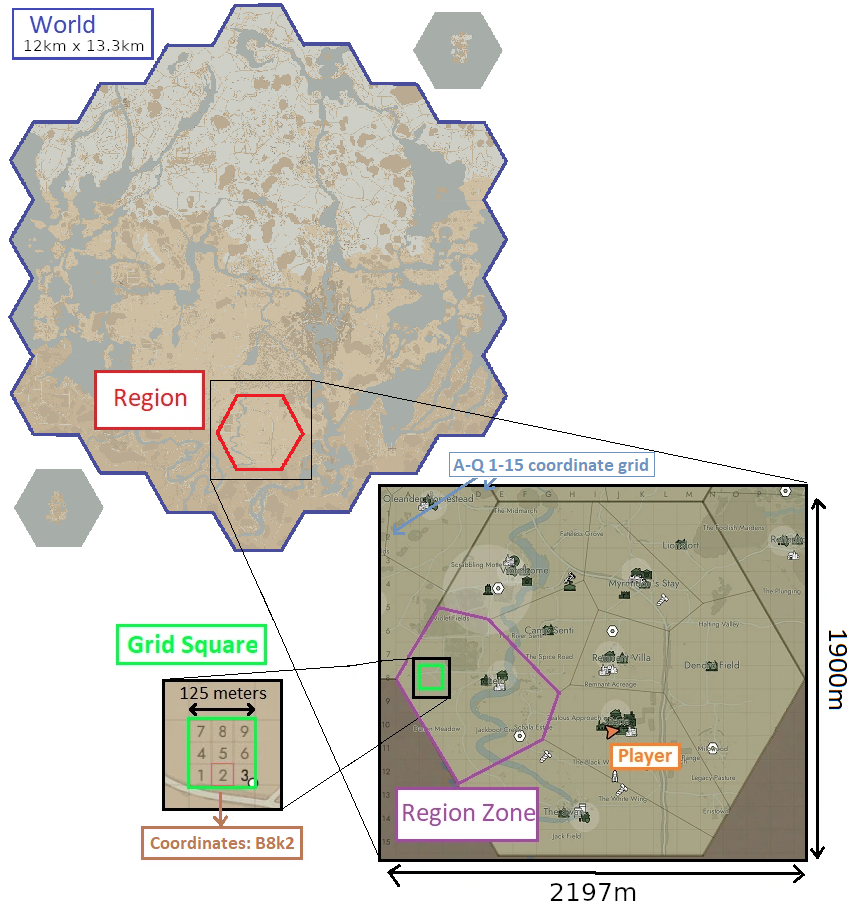 on the map is your character.

In the top left corner of your map, you'll see the state of the war and the War Achievements.

Center left is the Map Legend and Filters.

Bottom Left section is info related to your location, the world date, time, and map intel.

Here's what each Legend icon is specifically used for:

On top of those legend icons, there are more unique icons appearing on the map, each representing a specific building.

The following are always visible on the map for both factions:

The unique icons below are only visible for the faction that owns them:

Map Filters on the left side, in the Map Legend, allows you to filter what's on the map. Here's the list of all filters and what they show / hide: 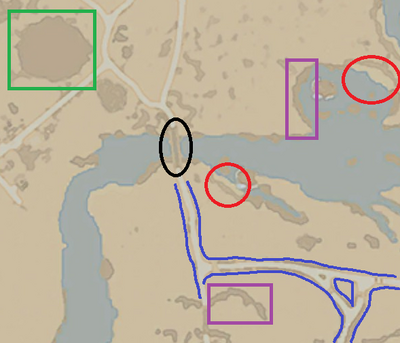 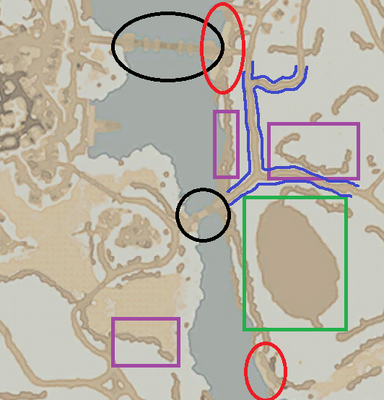 Roads are white on southern maps and light brown on snow northern maps.

Beaches are light yellow on the map, with a light brown outer border on snowy maps. Beaches are the only place beside Shipyards and Seaport docks where a barge or Landing Ship can land, and the only spots where you can build motorboats. It's thus very important to be able to recognize them on the map.

Mountains are large impassable obstacles, in brown on the map. Don't confuse them with cliffs.

Cliffs and elevation: (In purple square)

Cliffs are the only indicators of elevation on the map. Since holding the high ground is a tactical advantage, knowing the topography of terrain is important. Cliff and climbable rocks are usually visible on the map. The map doesn't show actual elevation but it can inferred from looking at the cliffs.

Rivers and lakes are obviously in light blue on the map. During Snow Storms rivers can freeze and become crossable by infantry and vehicles.

Any entities, friendly or not, spotted by one of the aforementioned sources are marked on the map with one of seven icons, showing their respective location. The color of the icon determines the affiliation of the spotted entity, with blue for Wardens and green for Colonials.

Entities, if not continuously spotted, will have their icon on the map fade over time. Eventually, the icon will disappear from the map (after less than 10 minutes).

Spotted friendly structures will turn orange for a while if attacked by an enemy.

It is wise for at least one player on the front lines to carry a Radio on them so they can, for example, note potential enemy weaknesses or report a large enemy push, in real time.

The box in the bottom left corner of the map indicates when you last got a map intel update. It also shows you the current in game date and time, which allows you to know when it's going to be night time (from 6PM to 6 AM).

Each Region Zone contains a single Town Base or Relic Base. Ownership of that base determines the ownership of the zone and its blue or green color on the map. When you hover your mouse over any zone, text will state whether this territory started as "Friendly territory" or as "Neutral / Enemy territory". This is determined at the start of a war and influences how fast a base in that zone will unlock its upgrades. Ownership of a given zone allows you to check the content of resource fields in it by putting your cursor on it.

Region borders have special mechanics. You cannot build within 60m from any region border, unless you're in the 40m radius of a Border Base. Structures built between 60m and 150m from a region border suffer from unpreventable fast Decay.

When one faction owns the entirety of one region and the other faction owns the entire neighboring region, the border between those two regions becomes a frontier border. It's shown on the map by a thick red line. This activates the use of Border Bases. No intel can be gathered within 100m of the border, even if you build watch towers. The border stops being a frontier border once a faction captures a Town Base or Relic Base in the enemy's region.