Welcome to Foxhole! If you're new to the game, there are many community made tutorials available to you! For more help, feel free to stop by the Foxhole Official Discord or the Steam Discussions and Guides! If you are unsure of any terminology that players say, please refer to the Slang page.

A video explaining all the basics.

After clicking "Play", you must choose which shard you want to play on. A shard is basically a separate game server independent from the other shards. The shards help the game handle more players. You can play on both shards, even on different faction. Shards are not linked to world regions (EU, NA, Asia, etc...), every player around the world can play on the same shard.

The "Live-1" usually is more populated which can mean longer waiting queues.

After selecting a shard, click play again to get to the faction selection screen.

You are presented with a choice to join a faction: Wardens or Colonials.

The two factions are very similar, gameplay wise. They do have visual differences between their vehicles. Be warned though! You will be locked to that faction (on that shard) after playing for 6 minutes as them and you won't be able to change until the current war is over and a new one starts. When playing with friends, it is best to decide beforehand which faction to join as, to avoid being locked into different factions for the remainder of the war.

If you are below level 5, the game grants you a single chance to switch faction past the 6min limit.

Press the "Deploy" button to spawn on the Home Region Island.

The Home Region is not the actual war but a lobby and a training area. 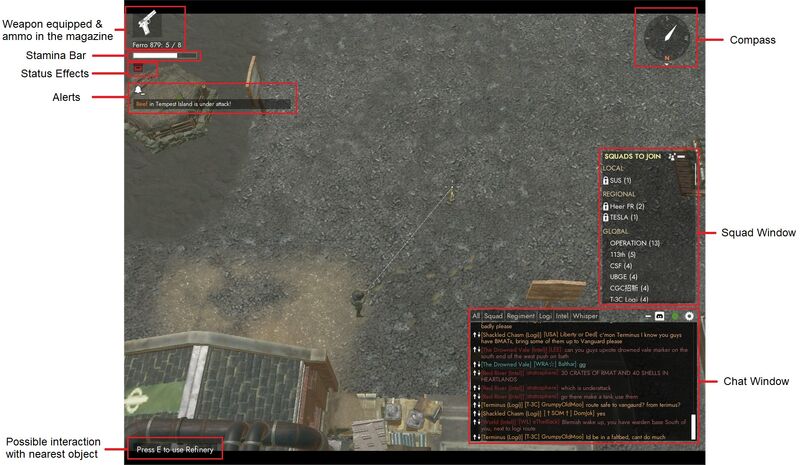 For now the only status effects you should really know about are:

Here's a quick explanation of each channel:

Press M to open the map, this will only show the map of the Home Region for now since you haven't joined the real world. The orange arrow is you. Notice the different training areas marked, and the "Deploy" areas represented by crossing swords. The deploy point is where you'll need to go to join the real war.

You can change your appearance at any of the cylindrical barracks near the area you spawned in. Press E to open the appearance menu.

Deploying into the War[]

To get into some action, locate the Spawn & Deployment (Deploy) on the map and head there. When you are close enough to the deploy area, press default key E to open the deployment menu. You can also check the war map by going to a War Tent close by. Each region is separated in areas that will either be colored with respective faction's color or not having any at all. This is decided by what faction controls the current Town Hall. Click a black diamond (representing a base) on the Deployment map to teleport to that specific point of the map, the bigger the diamond the more active the zone.

Once you've deployed to a base, the first thing you should do is assign your spawn to that base so that you can respawn there after you die. Press E to open the Base's menu and click the house icon

at the bottom to assign your spawn there.

After dying, you will be able to spectate friendly soldiers near your corpse while being able to cycle through them with PgUp and PgDown.

You can click the respawn button to respawn at the base you chose. This process consumes 1 Soldier Supplies (item that looks like a shirt) in the base's stock. Once the base no longer has any Soldier Supplies you can no longer respawn there! So keep an eye on the amount your base has.

You can only assign yourself two possible spawn, a Forward Base spawn and a Home Base spawn (Town Base and Relic Base). Selecting a new spawn point will replace the old one.

At your base, press E to open its menu. In the center is the stockpile, click on what you need to retrieve it (takes a few seconds per item). Grab a Rifle and 2 or 3 magazines of the corresponding ammo (usually 7.62mm). Close the menu with Escape, then press Tab to open your inventory. Click on the rifle in the bottom "backpack" section to equip it and Tab again to close the inventory. Press 1 to equip your rifle and R to reload it. Aim with RMB and fire with LMB.

You can drop unwanted items in your inventory with Alt + LMB.

Also grab a bandage. if you are bleeding

, equip the bandage (gets in the third slot), press 3 then LMB to use the bandage. It will stop the bleeding but not heal you.

You can carry downed soldier by pressing V to move them to safety or bring them to a medic. The downed soldier cannot bleed out as long as they're carried. Press Shift + V to drop them.

You know the basics to fight. Read the Combat Guide to learn more.

Open the map and find the nearest front line (where blue and green icons meet).

Logistics is a huge aspect of the game. Nearly every item, weapon, ammo, structures in the game is created by players.

There are several main resources you will gather during the war.

Gathering resources is a simple as equipping a Hammer or Sledge Hammer, going to a resource field, positioning yourself near a small resource pile, and clicking the pile until it is depleted. Or collected from a Resource Mine.

A successful mining strike will produce a banging sound and sparks/smoke. A message will appear on bottom left of the screen telling players that they collected +2 (resource type).

Reminder! Components and sulfur can only be gathered with sledgehammers. Hammers do not work.

Once obtained Salvage, Components, Sulfur, and Crude Oil can be refined at a Refinery

Salvage can be refined into either Basic Materials (Bmats), Explosive Materials (Emats) or Diesel.

Components can be refined into Refined Materials (Rmats).

Sulfur can be refined into Heavy Explosive Materials.

Crude Oil can be refined into Petrol.

These materials play a vital role to securing victory in the war. Basic Materials are used in nearly every aspect of the game: building defenses and vehicles, making weapons and tools, among other things.

Explosive Materials are only used at the Factory

to produce explosives such as Grenades or R.P.G. shells

Heavy Explosive Materials are used for really advanced explosives like mortar or howitzer shells and the Warhead. 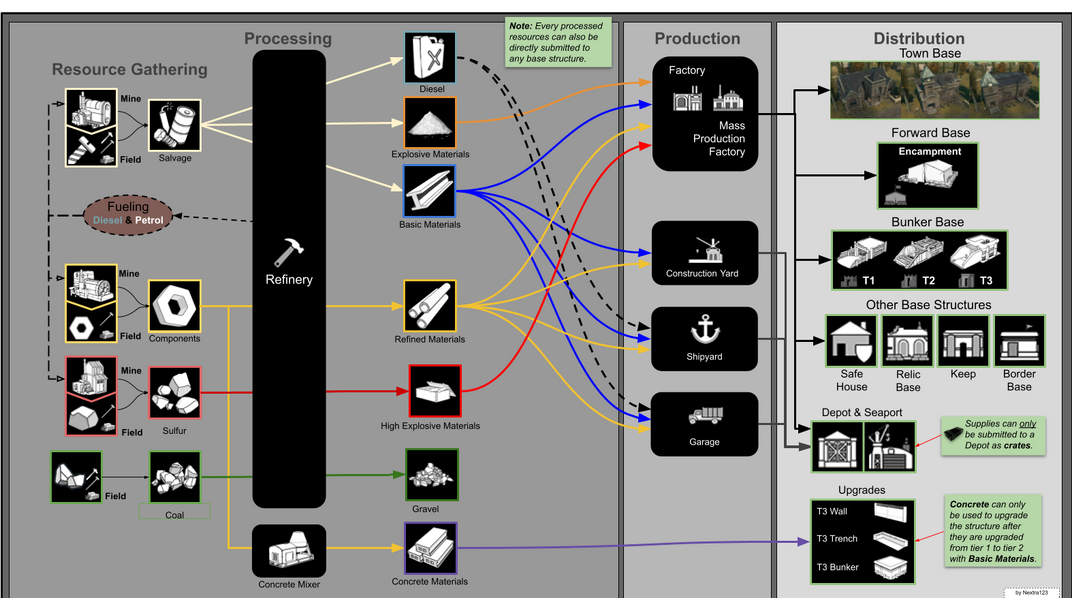 Bunker and Trenches in their first stage just require a shovel, but when upgrading them to the next tier, you'll need Basic Materials and in higher tiers Concrete.

Repairing structures always only cost you Basic Materials to repair, even if you needed another resource to build it.

Bunker Bases: For a tutorial on how to build a basic bunker base check out this video here: https://www.youtube.com/watch?v=3clsDKZOlzU&ab