Aim by holding right click and shoot by pressing left click. There's no hipfire in the game.

The accuracy of your gun at a given moment is visually represented by the size of your crosshair. The span of the crosshair corresponds roughly to your accuracy at 10-15 meters; for a target at that distance your bullet can land anywhere within the area defined by the crosshair.

Firearm Stability represents how stable your weapon is, that is how fast it recovers its accuracy. Your stability is affected by:

Firearms in Foxhole are more or less accurate, depending on various factors.

The losses from both depends on the firearm type, each type must be tested to know how they behave. A sniper rifle will lose more accuracy to recoil than a pistol. A submachine gun won't lose much accuracy from quick movements and turns when a rifle would lose everything. 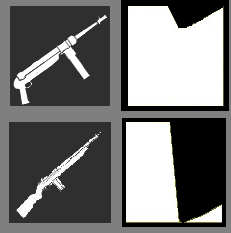 When aiming with a firearm, a vertical orange line under your aim point indicates how high you are aiming above the ground. That height depends on your stance and what you're aiming at.

If your cursor is on a vertical surface (wall, side of a vehicle), you are aiming exactly where your cursor is and can freely change your aiming height. The position of your crosshair dot matches your mouse cursor.

If your cursor is on a horizontal or sloped surface, your crosshair hovers at a specific height above the surface and your cursor. You do not directly control that height, it only changes with your stance. When standing or crouched, the height is slightly lower than your firearm, putting your bullet on a slight downward trajectory if fighting on flat ground. If you are prone, the height is the same as your gun which puts your bullet on a perfectly horizontal trajectory if on flat ground. Those heights are nearly identical for all infantry firearms (slighly different for automatic weapons). The only exception to the horizontal surface rule is the top of vehicles, your crosshair will remain on your cursor not above it.

Remember that when aiming on horizontal or sloped terrain your crosshair dot is NOT your cursor's position, your cursor remains at the bottom of the vertical orange line.

For machine guns mounted on vehicles or structures (emplacements, tripod), your crosshair is always exactly where your cursor is. If you aim at the ground your bullets will land exactly where you aim (minus the gun's inaccuracy). 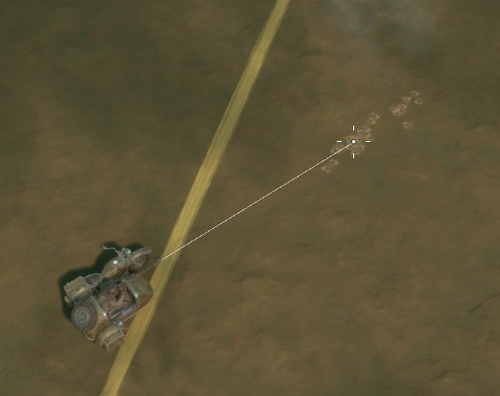 Given the specifics of the firearms stability system, it is clear that positioning and using cover is crucial to winning gunfights. Being in cover means your shots will be more accurate (thus less susceptible to RNG) and you'll be able to shoot faster since you recover your accuracy faster. And on top of that the cover makes you harder to hit!

Every firearm's accuracy behaves in a different way, which guides how you should use them. Trying to quickly aim and shoot after a long sprint or fast movement is absolutely not advised with a rifle for example, but perfectly fine for a pistol or submachinegun. How you aim and how you move is dictated by the weapon you're using.

Also, being in a higher position over your target helps you hit it more easily in most cases, especially when cover is involved.

In general, you should try to aim behind your target because it allows you to clearly see your aim line becoming red when it intersects the target which shows it is correctly aligned.

Due to the awkward aiming system, there are many scenarios where hitting your target is mostly dependent on where you place your cursor, rather than just the accuracy of you shots. In some cases a target that seem like it should be exposed is in fact impossible to hit, which leads to a lot of confusion and frustration from new players.

Below are a few instances of tricky situations.

Enemy behind cover on higher ground:

When there's an elevation difference between you and the enemy soldier and they are behind cover (enemy standing on a storage box behind a sandbag wall or crouched behind the side covers of a bridge), no matter where you aim your cursor your accurate shots will almost never land on your enemy because of the fixed aim height:

You can decide to spray and hope your inaccuracy move your bullets in the right direction. But the best course of action as an infantry when this occurs is to suppress the enemy and either flank them or use frag and gas grenades. Alternatively you could try to go prone and aim on the cover's top, the shorter aim height might allow you to hit the enemy.

Note that mounted machineguns don't have this problem, they can simply aim on the cover's top because they don't have any aim height, and being mounted they generally have less elevation difference with their target.

When fighting a prone enemy, you must aim at their head if you don't want the fixed aiming height to make your shots pass above them. The one exception is if you are prone yourself. 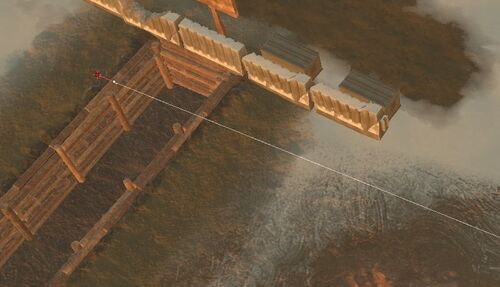 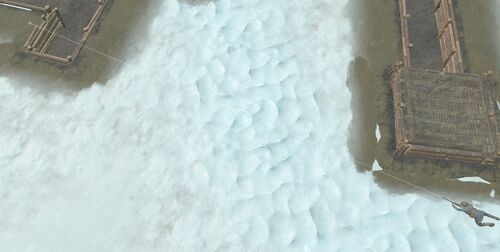 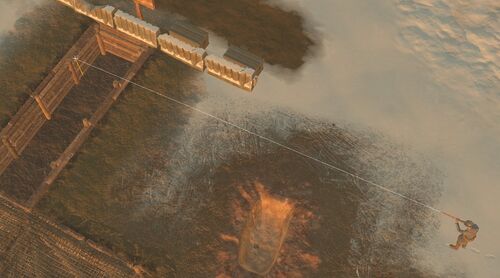 When you and your target are in the same trench, make sure to place your cursor inside the trench so as to not shoot at the sky. This also holds true when fighting on the second floor of a destroyed Garrisoned House.

Enemy in Foxhole or Crater

The best way to hit an enemy in a Dug Foxhole or Crater is to aim high on the back wall. 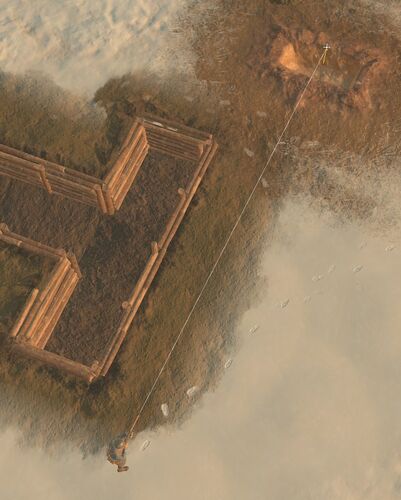 Every direct-fire cannon in the game (30mm, 40mm, 68mm AT) is aimed the same way as a vehicle-mounted machine gun. Your crosshair is exactly where your cursor is. If you aim at the ground your shell will explode exactly where you aim (unless you're aiming beyond the maximum range). The only difference is that every shot is always pin-point accurate as shown by the tiny crosshair.

If a shell reaches the maximum range it automatically explodes.

Except for the Bonesaws, the aim of every RPG Launcher and Anti-Tank RPG behaves exactly like infantry firearms. The only difference is that the projectile is affected by gravity which explains the weapon's slighly curved white aim line. There is also no crosshair since those weapons are 100% accurate.

This means that you will need to aim at high points (usually the flat top of your target) to maximize your range as the projectile is always on a downward trajectory. The range gained between aiming at the ground and aiming at the top of a building can be up to 10m for the Cutler Launcher 4.

At close range however, if firing at a structure you might want to aim behind your target rather than on top so your projectile don't fly above it (since your crosshair is a fixed height above your cursor when on flat surface, just like with infantry firearms).

Also, the projectile automatically explodes beyond its max range which depends on the RPG launcher type. 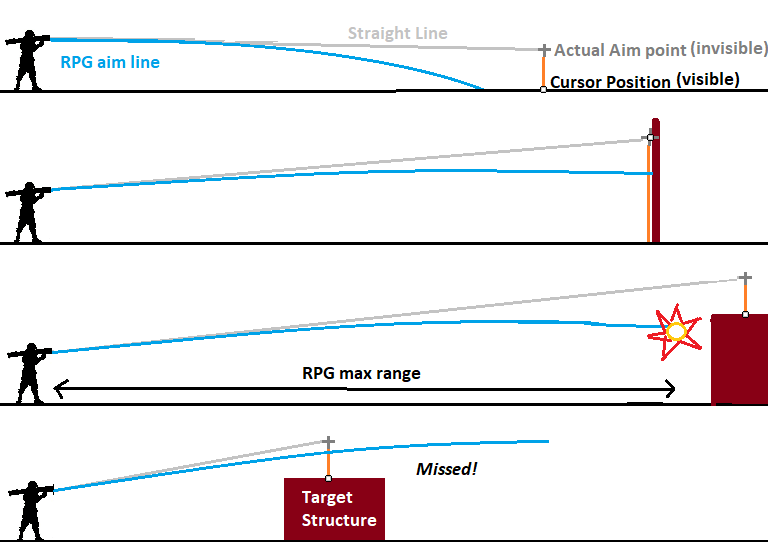 Every grenade (except the Sticky Bomb) and the mobile version of the Bonesaw behaves the same way. When aiming the curved white line ends exactly where your cursor is, unless you're aiming past the weapon's max range. When you reach the max range the shape of the white line become fixed and no longer change no matter how far or high you aim.

However you can increase your range by firing from an elevated position, the higher the better.

The projectile always lands where the white line ends or becomes red, but in the case of grenades they might bounce a small distance afterwards. 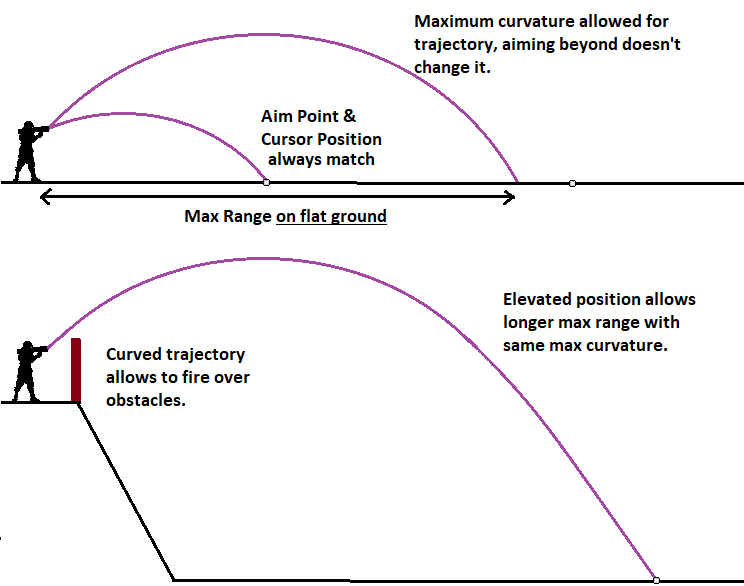 The mounted version of the Bonesaw is aimed similarly except the trajectory changes when you place your cursor on an elevated spot, even when beyond the maximum range which effectively increases it. The shell still lands exactly where the white line ends or becomes red.

This means that you can gain range by firing from an elevated position but also by placing your cursor on an elevated position (the top of a vehicle, a hill, etc...). In the best case scenario the mounted Bonesaw's maximum range can become 50 meters (37m on flat ground).

Although the Sticky bomb's white aim line looks similar to the RPG launchers, it behaves differently. Like a grenade the curved trajectory won't change if your cursor is beyond the max range (~6m). But if the white line's very end is on a structure or vehicle, the line end will automatically move upward to the near top of the structure/vehicle which will drastically change the trajectory. If your cursor is beyond the max range it doesn't coincide with the end of the line, which makes it harder to gauge where the end is and as a consequence you might be caught off guard by a sudden trajectory shift while trying to move and aim. It is thus better not to place your cursor beyond the sticky bomb's very short max range.

Every indirect fire weapon system in the game is inaccurate to some degree. The inaccuracy depends on the weapon type (the larger the caliber the larger the inaccuracy) and on the range you're firing at. Wind also affects where your shells land and must be taken into account if you want to hit anything.