This article is considered accurate for the current version (0.45) of the game.

Callouts are quick pre-made messages that can be sent to teammates at the press of a button. To bring up the Callouts menu, press the H key by default.

The HUD menu has text and marker callouts, which can be made every 10 seconds. Selecting any of them will post their message in the local Chat and show it above above player for 3 seconds, simliar to local chat. Selecting a marker callout allows the player to select a point on the ground. A marker will travel from the player to the selected point and will be visible to all allied players who can see it. Marker "jumps" at 10 seconds and stays visible for 20 seconds. 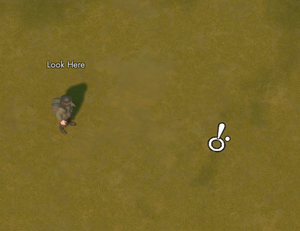 Map Callouts were removed in update 0.27 and replaced with Map Posts.